In the last decade the global economy has faced its worst recession since the World War II with a direct impact on the life quality of the population all over the world.  While the effects of the financial and economic downturn continues to be felt, it is increasingly recognised that governments need to aim not only at making the economy work but also at making society work.

At B&S Europe, we firmly believe that sustainable growth can be achieved only when the economic development is accompanied by social development, creating an environment in which all people can benefit from the social and economic progress.

Social affairs field has been one of the core fields of activity of B&S Europe since the founding of the company. Throughout the years, we implemented a wide number of projects sustaining reform of the social services, supporting employment and social inclusion, improving access to education, promoting the rights of persons with disabilities and striving to achieve gender equality, in Europe and worldwide.

The social protection and social inclusion field has grown to be the main focus in efforts to reduce poverty around the world. Social protection consists in a set of actions which address not only income poverty, but also social vulnerability, considering the inter-relationship between exclusion and poverty.

Productive employment and decent work represents essential elements in poverty reduction and social inclusion. The main area of action in achieving an increased employment in “conditions of freedom, equity, security and human dignity”, are: job creation, rights at work, social protection and social dialogue, with gender equality as a crosscutting issue.

In B&S Europe, we recognize the fundamental role of the education and training for the development of nowadays knowledge society and economy, on one hand, as well as for overcoming inequalities and promoting social cohesion, on the other hand.

Through the projects implemented, we worked to develop and enforce education and training policies and strategies to enable to all citizens the access to quality education that will permit them achieving and renewing the knowledge, the skills and the competencies necessary for employment, economic success, active citizenship and personal fulfillment throughout their lifetime.

The general principle of equality and non-discrimination is a fundamental element of international human rights law.  People worldwide are still facing discrimination based on race, ethnic or social origin, membership of a national minority, disability, age or sexual orientation etc.

We are cooperating with specialized actors to combat any form of discrimination and promote and protect the human rights of people around the world.

To see the list of B&S Europe projects in the Social Affairs sector, click on this page or go to the Projects section.

To see the Success story and factsheet of one of our Social Affairs projects, click on the picture just below. 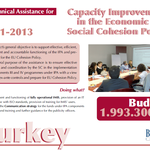