Beyond the classical notion of the monopoly of force, the rule of law along with the respect of Human Rights are some of the basic defining characteristics in the construction of a modern democratic State. Laws produced by elected bodies and officials within the framework of an institutional system must respect the hierarchy of norms, as well the separation of powers. Furthermore, the legal framework must be consistently applied by an independent judiciary to all natural and legal persons alike, be they private or public, in order to guarantee civil, political, economic, social and cultural rights and freedom. The European Union is based on the rule of law: all external actions conducted by the EC are based on the assumption that it will lead to a global improvement in the field of rule of law.

Only through establishing rule of law at both the national and regional levels can we establish a long-term antidote to the most pressing problems facing the world today, including poverty, conflict, endemic corruption and disregard for human rights.

B&S Europe possesses long experience in the management of projects in :

To see the list of B&S Europe projects in the Rules of Law sector, click on this page or go to the Projects section.

To see the Success story and factsheet of our Rule of Law projects, click on the picture just below. 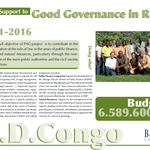