On 8 June 2020, the team of the project “EU Libya Expertise, Analysis and Deployment (EULEAD)” participated in a meeting together with the Libyan Minister of Interior (MoI), Fatih Bashagha, and the EU Ambassador to Libya, Alan Bugeja, to discuss the situation of Improvised Explosive Devices (IEDs) in South Tripoli.

The EULEAD was requested to bring its support to securing South Tripoli in a complex security context. Following a rapid counter-offensive from the Government of National Accord (GNA), the Libyan Arab Armed Forces (LAAF) have been pushed out of Tripoli in Libya, after a war that lasted since April 2019. After the withdrawal of LAAF troops, supported by Russian mercenaries, a large amount of improvised explosive devices (IEDs) and booby-traps have been found in residential areas of the city, which were the battlefront until weeks ago. The explosives have caused numerous casualties including civilians trying to return home after the conflict, and demining teams insufficiently trained and equipped.

To secure the area, EULEAD is providing to the Forensics Police technical advice on how to identify and safely handle IEDs. In addition, EULEAD will support the creation of joint teams between the Forensics police, in charge of IEDs clearance, and the National Safety Authority (NSA), in charge of Explosive Ordnance Disposal (EOD). This support will be provided through trainings and the provision of equipment in the coming weeks.

Our work aims at allowing the safe return of displaced people, while enabling Libyan authorities to independently address the EOD/IED urgent matter, thats threatens Libyan lives. The meeting concluded with a common understanding between the Minister and the Ambassador, stating that EULEAD support will be an essential cornerstone to the demining actions in Tripoli. 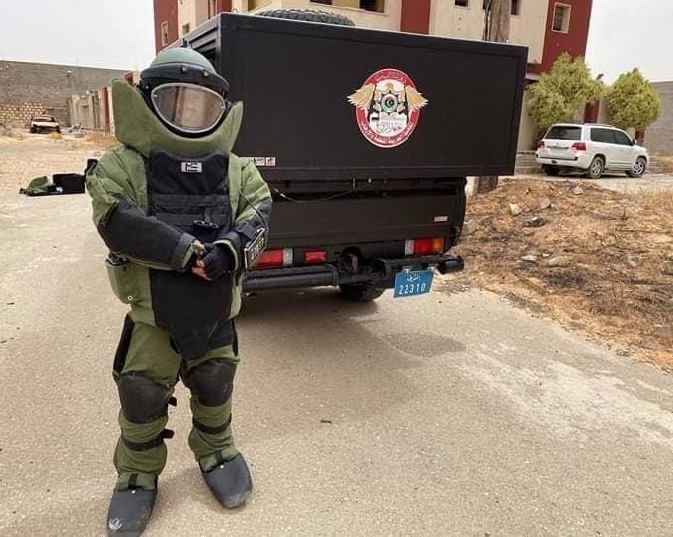