LEBANON | The CBRN Risks Mitigation project coming to an end

Under the EU-funded project “Technical Assistance on CBRN Risks Mitigation in Lebanon”, B&S Europe together with SAFE (Security and Freedom for Europe) benefited from an innovative public private partnership which allowed direct engagement in the consortium of Italian Defence General Staff and French Ministry of Foreign affairs (respectively leading military and civilian-related activities).

From August 2018 until June 2021 (34 months), the team has provided strategic support to the Lebanese CBRN Commission on national issues through periodic meetings and advisory on the enhancement of the National Action Plan. Given the dire challenges that Lebanon has been facing since 2020, the project has also utilised its expertise to support Lebanon in its response to the COVID-19 pandemic and operational support in the aftermath of 4th of August explosion.

The project dedicated a high share of resources to the:

1/ training over 1100 personnel over 80 training weeks and certifying 47 trainers to guarantee sustainability.

2/ Implementation of a series of 5 real-life, practical, national scale workshops and implemented exercises, which engaged directly the Lebanese Armed Forces, Internal Security Forces, Civil Defence and Beirut Fire Fighters. As a result of these workshops the response capabilities in case of CBRN events was increased.

3/ Development of the standardization of the first and most important step of any CBRN intervention, through the creation of a unified Warning and Reporting approach across all agencies and a subsequent inter-agency SOP.

At the conclusion of the project, the EU TA is proud of project achievements and the level of CBRN capacities reached by Lebanese counterparts, in particular the Full Operational Capability of the CBRN Company of the Lebanese Armed Forces, the 24/7 – 7/7 response guaranteed by Beirut Fire Fighters, the basic intervention capacity of the Civil Defense throughout the country, the specialised forensics and SWAT competences within the Internal Security Forces as well as the first CBRN response of the Governmental Guard for the protection of Lebanese Prime Minister.

Overall, over 140% of originally set targets have been achieved by the project. The trust established between the beneficiaries and on-duty military experts, improved significantly to the benefit of Lebanese citizens.

Funded by the European Union, the project "EU Technical Assistance on CBRN risk mitigation in Lebanon" aimed at improving the governmental capacity for emergency preparedness and crisis response (for both man-made crises and natural disasters), in particular CBRN incidents. 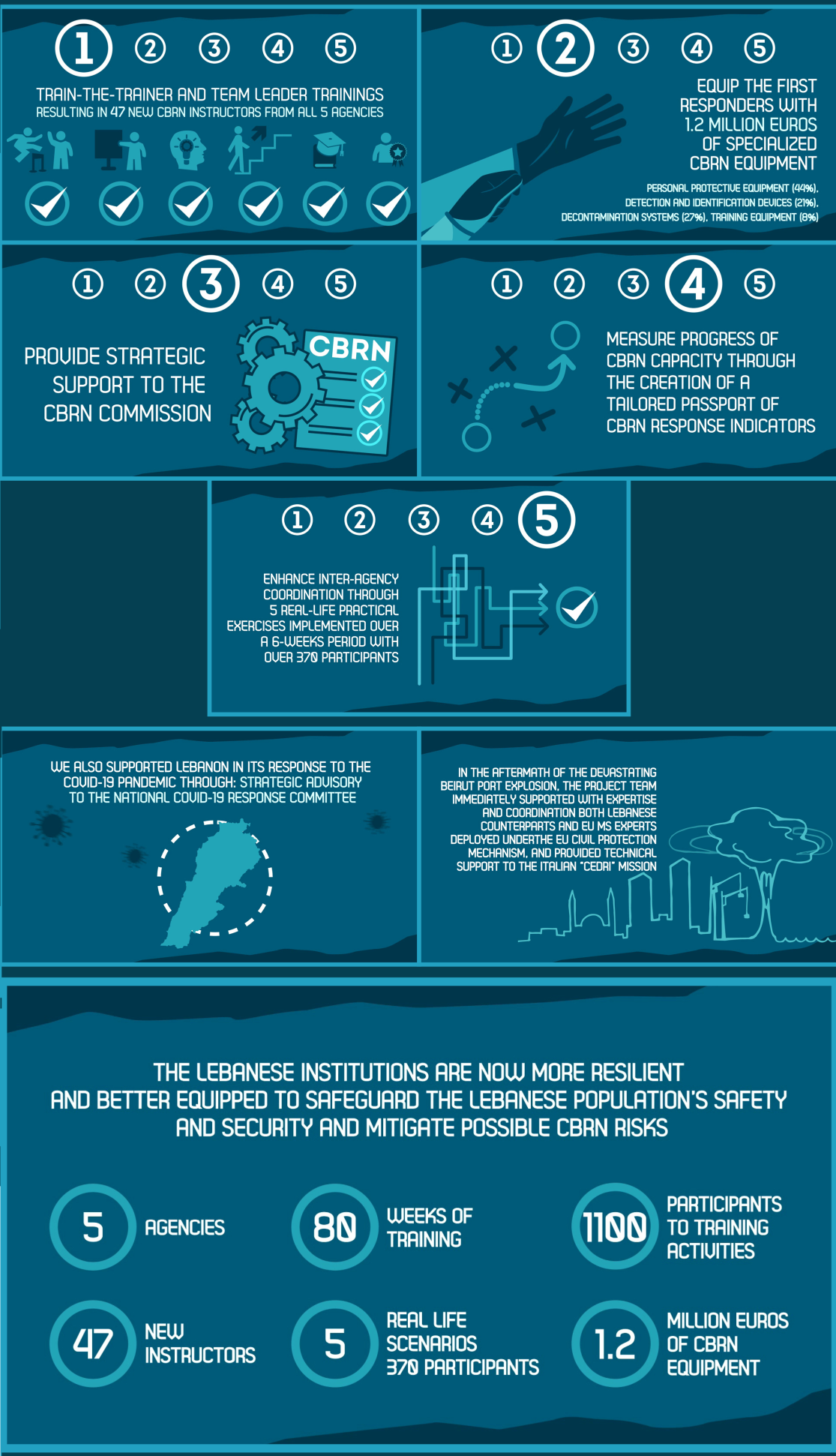